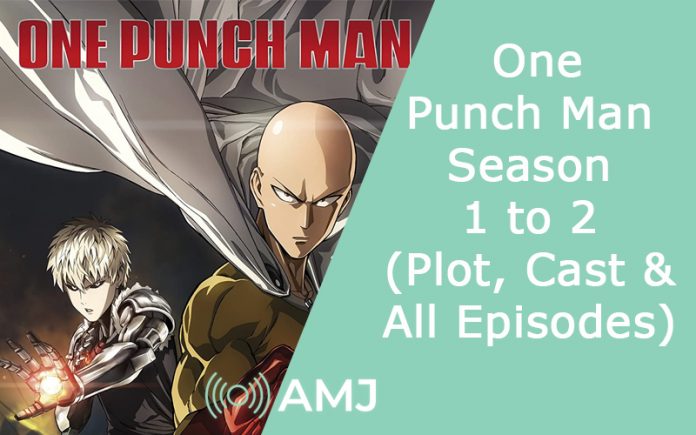 If you are into anime, you must have heard about the series “One Punch Man.” This is one of the greatest superhero anime series ever made.

One-Punch Man is a superhero anime franchise created by the artist ONE. It tells the story of Saitama, a powerful superhero who can defeat any opponent with just a single punch. He is in search of a worthy opponent who can challenge him for a fight. Throughout the series, you will witness his overwhelming strength and some iconic fight moments.

This is an entertaining anime series that will humour you with the story of Saitama, a superhero with an existential crisis. Although Saitama is an all-powerful character, you will still want to sympathize with him as he struggles to figure out his issues. But thanks to his larger-than-life punches that help him defeat monsters and other opponents. Usually, his confrontations with his opponents lead to some hilarious moments. This is what makes the series more fun to watch.

This light-hearted comedy series will surely win your heart once you start watching it. If you want to know more about the series, give this article a read.

What is the plot of One Punch Man?

One-Punch Man is based on a popular Japanese webcomic. The story revolves around a superhero named Saitama. The series shows how boring and mundane life can get for a powerful superhero.

On a supercontinent Earth, powerful villains and monsters have caused havoc in the cities. To fight these monsters, the millionaire Agoni forms the Hero Association to employ superheroes to fight evil. Saitama, the main hero of the series is hailed from City Z and performs heroic deeds out of passion.

Saitama has trained himself to become so powerful that he can easily defeat any opponent with just a single punch. But his overwhelming strength has left him with a sense of boredom as he is unable to find a challenging opponent.

Saitama becomes a mentor to Genos, a cyborg seeking revenge against another cyborg who destroyed his hometown and killed his family. They both join the Hero Association. But due to poor grades in the entry exam, Saitama is given a low-entry rank.

The Hero Association calls all the top heroes to inform them that the world is in danger. Soon after, an alien named Boros attacks the planet. The heroes bravely fight outside Boros’s ship, while Saitama fights Boros, who survives more than one punch from Saitama.

The monster has formed its Monster Association to destroy the Hero Association. They attack various cities, recruit fighters by causing them to mutate with “monster cells”, and kidnaps the child Hero Association’s executive.

The Hero Association reaches the headquarters to save Garo and the executives’ child which leads to a chaotic battle between the two groups. City Z is destroyed and the majority of the Monster Association’s leaders are killed. At the same time, many of the overconfident heroes are also defeated.

Garo defeats the remaining heroes before he is defeated by Saitama. However, Saitama spares Garo’s life, despite the objection of the other heroes. The poor performance of the Hero Association causes several heroes to retire.

The Cast of One Punch Man

Index of One Punch Man Season 1 & 2 [All Episodes]

As of now, One Punch Man has two seasons consisting of 12 episodes each. You can watch all the 24 episodes of the series on Netflix. Here are the details of the episodes.

Episode 11: The Dominator of the Universe

Episode 1: Return of the Hero

Episode 8: The Resistance of the Strong

Episode 9: The Troubles of the Strongest

Episode 11: The Varieties of Pride

Episode 12: The Wiping of the Disciple’s Butt

One-Punch Man is a hilarious, superhero anime. Unlike other superheroes, Saitama is a bald, thin man with an existential crisis. The series has got a unique storyline and is a must-watch for every anime lover.

1. When was One Punch Man released?

One-Punch Man was first aired in 2015. Since then it has gained a huge fan following who cannot wait to get more of this hilarious anime.

One-Punch Man is a Japanese anime series based on the webcomic created by the artist One. Its manga adaptation is illustrated by Yusuke Murata.

3. What’s the secret behind Saitama’s power?

Saitama trained so hard that he became the strongest man in the world. After years of hardcore training, he can reach a point where he can defeat any opponent with just one punch.