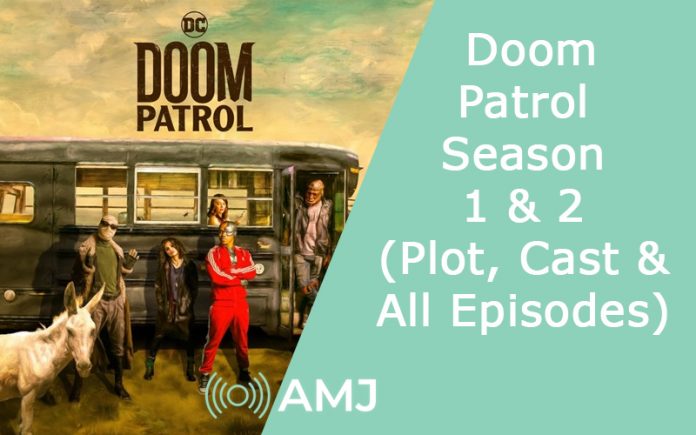 Are you someone who takes interest in superhero television series? If yes, don’t worry, we aren’t going to bore you with the traditional and repetitive superhero series because there’s something new that we need to introduce to more audiences. Doom Patrol is a popular American television superhero series created and developed by Jeremy Carver.

The plot of the show is based on the DC comics under the same name. Unlike most of the other superhero series that focuses on the individual superhero, this series is a cumulative effort of the popular Doom Patrol who come together to save the world.

The series is a pretty recent one, wherein the first season was released in 2019 exclusively for the DC streaming service. However, it was later released and expanded to HBO Max for the U.S residents to watch and stream. The show is currently renewed for a third season but there are no reports as to when the same will come out.

Currently, Doom Patrol has two seasons that you can stream on HBO Max until they decide to confirm the release of the third season of the show shortly.

What is the plot of Doom Patrol?

The plot of the show follows the members of Doom Patrol, an eponymous team that consists of a group of unlikely heroes who have been shunned from society and have gathered their supernatural powers from tragic situations that they have been subjected to.

The season kicks off by introducing the first member of Doom Patrol, Jane, the dominant part of the team who suffers from a dissociative identity disorder. It then introduces the audience to the Elastic Girl, who consistently struggles to prevent her body from getting into a gelatinous state and hence the name.

Another character or part of the Doom Patrol is Larry Trainor, someone who struggles with negative energy feeding inside of him. The last character in the plot is Cliff Steele, whose brain was integrated into a robot body following a car crash.

The first season also witnesses the Chief getting captured by Mr. Nobody, following which they send along the summon Doom Patrol to rescue them. However, along the way of the rescue mission, people are faced with a lot of hidden secrets and the tragic events that they experienced in their lives to obtain the superhero powers that they have.

The second season of the show brings along a new cast in the form of Dorothy Spinner, who is no one but the Chief’s daughter. Her special ability is to bring her imaginary friends to life. While the members of the Doom Patrol are trying to make do with their own lives and the secrets that they have been exposed to recently, Dorothy puts the world at risk by using her power to unleash an ancient character called the Candlemaker.

Who is cast in Doom Patrol?

The cast of Doom Patrol is pretty new and unconventional. If you are expecting to witness some world-class and popular Hollywood actors, you are mistaken. The cast instead includes the rising stars in the field.

The main cast in the series include:

Currently, Doom Patrol only has two running seasons with a total of 24 episodes. However, the show has been renewed for a third season, which means that you will be able to explore more pretty soon.

If you have been looking for an Index of Doom Patrol, we have got you covered.

For the third season, there isn’t any official confirmation as to when it might be released.

If you want to laugh, witness some amazing stunts and actions and have fun watching a non-mainstream superhero series with representation, Doom Patrol is a pretty amazing show to binge-watch. Since the third season is in the talks, we’d recommend that you start watching them on HBO max and catch up to the episodes before the third season is released.

No, the show, after receiving a positive response from the audience, has been renewed for a third season that you can seamlessly binge-watch once it’s released. However, there are no official dates yet.

2. Is Doom Patrol Available on Netflix?

Yes, Doom Patrol is available on Amazon Prime. Both the first and the second season of the series are available for streaming. However, there aren’t any exclusives about the third season yet.