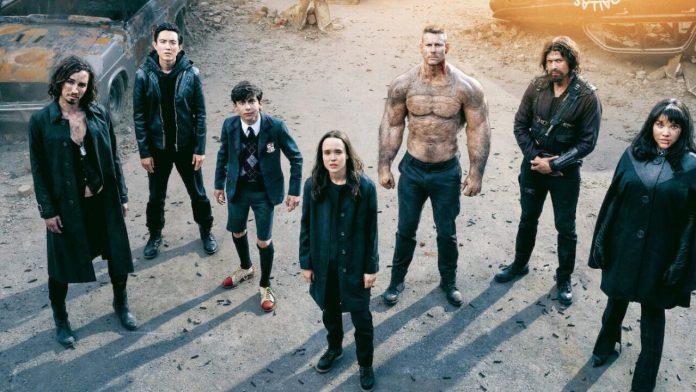 Netflix is yet to cancel or renew the Umbrella Academy season three. According to a new production list, season three of the show is getting ready to start shooting next year in February.

According to ProductionWeekly reports, season three production is scheduled to start on 1st February 2021. They are planning to wrap up filming by August 2021.

If this turns out to be true, then we can be a bit optimistic about the release of season three in 2021. But it is mostly dependent on how long the entire post-production process will take. Other than that there are many things on Netflix’s checklist before it gives a green signal to the third season of the show.

If everything goes as planned, then we can expect everything to fall within schedule. However, that is hard to say with the current pandemic situation in hand.

Filming for season two was completed in November 2019 but it was not released on Netflix before the following summer.

Season three is planned to be filmed in Toronto.

However, we are here to receive an official announcement about season three returning.

In the case of Money Heist, we thought that Netflix is going ahead with the seasons. But after months of teases and speculations, Netflix announced that the caveat there was the final season.

For now, we know that season three of The Umbrella Academy is in active development. We also got to know this from the WGA directory that stated the same thing. But you never know when Netflix changes its mind.

Last month, we reported that the Canadian directors listed “production prep” to start in October 2020. But this sounds to be a bit premature, given the current dates of filming.

For now, nothing is confirmed by Netflix. Until they do so, we cannot be sure of anything. As we mentioned earlier, in recent months active development is not set in stone. One moment, Netflix plans to go ahead with a show, the other moment they cancel it.

Given the current development process, it is hard to say whether season three of The Umbrella Academy will start filming in February or not. If it turns out to be true, then we can expect the season to arrive on Netflix by 2022 or maybe before that.

As soon as we get more information on this we will update this content.