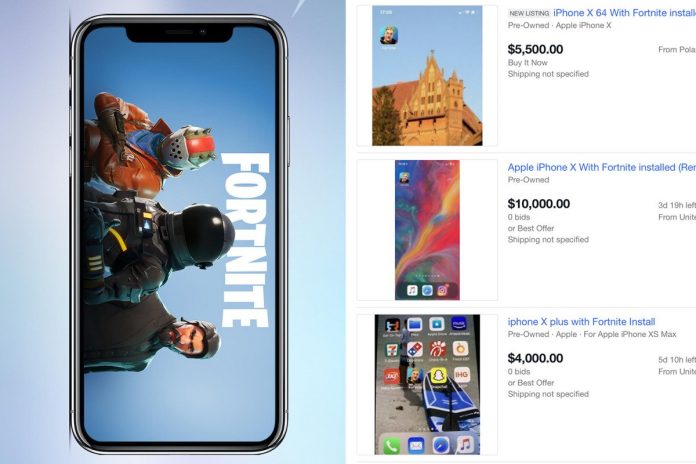 In case, you are not aware of the legal battles going on between the three big giants, let us help you. Epic Games is in the middle of an issue with two big mobile storefronts Google and Apple. Due to the intensifying tension between the companies, the demand for Apple iPhones with pre-installed Fortnite is on the rise on e-bay.

The cost of these phones is something around $10,000 and they come with a pre-installed version of Fortnite. At the starting of this week, Fortnite was removed from both Google and Apple app stores.

This happened because Epic Games introduced their payment platform which allowed them to collect direct payments from players. This didn’t settle well with both Google and Apple as it is against their policy.

Since the game is no longer available on the Apple store, players cannot download the game any longer.

Some shrewd minds taking advantage of this opportunity is now selling Apple iPhones with a pre-installed version of Fortnite on eBay. These phones are available at $10,000 which is around Rs 7, 50,000 in India. Another user was found selling an iPhone 8 for $3000.

The developer has claimed that Apple has banned their accounts from ios and iMac development tools. This is why the developer is forced to seek legal help from the court so that they can stop Apple from terminating their accounts.

In response to this, Apple has said that they are willing to join forces with Epic once again, only if they follow their guidelines.

What did Apple say?

In an interview, Apple claimed that its App Store is completely safe for their users to use. There are no doubts that Epic Games are a group of leading developers in the market.

They could draw millions of dollars to the Apple app store. But due to the issue created by Epic Games, Apple is forced to take such steps. But if they are ready to resolve the issue by agreeing to follow their guidelines, then Apple is willing to come back with them.

Right now, Fortnite is not available on both Google and Apple app stores. The game will not return until the issue between the three companies is resolved. This is indeed very bad news for all the Fortnite fans. To know more, you will have to stay tuned for upcoming updates.