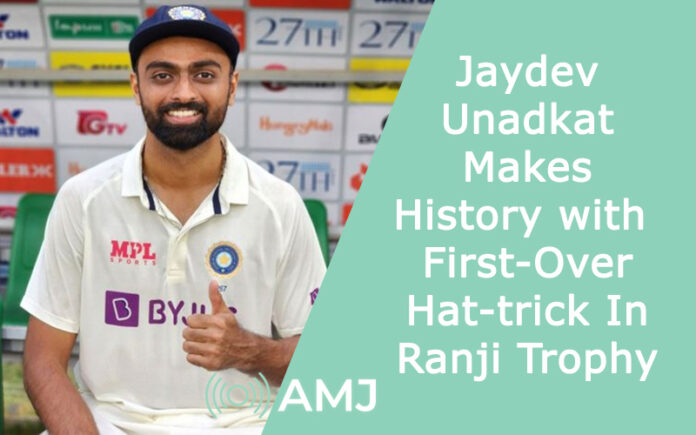 If you are an avid cricket lover and you keep up with every kind of tournament, chances are that you have heard of the recent achievement of Jaydev Unadkat. Following his comeback, Unadkat has left everyone in complete awe of his skills and his charisma on the field.

Following his 12 years break, Unadkat made history by being the first player to secure a first-over hat-trick in Ranji Trophy in his team’s recent tournament against Delhi.

Not only did it create uproar in the audience and on the field, but Unadkat also managed to create history by being the first cricketer to do so in the Ranji trophy.

The last time something similar happened was with Karnataka’s Vinay Kumar, however, he managed to secure the hat-tricks in the first and third overs back in the 2017-18 quarter-final against Mumbai.

The match against Delhi started with an lbw for Dhruv Shorey. But, Unadkat managed to sweep Shorey, along with two of the succeeding players in the match right in the first over, leading to the monumental hat-trick.

However, Unadkat didn’t stop there because he managed to complete his 21st five-wicket in a match just in the next over, wherein he claimed the wicket of Jonty Sidhu (4) and Lalit Yadav (0). With Delhi already on the brink of destruction on the field, Unadkat wasn’t done yet. In the third over, he claimed another wicket from Lakshya Thareja (1).

This left Delhi at 10-7, and in utterly bad shape for the remainder of the match. With Delhi trying their best to sustain themselves in the match, Unadkat managed to bring down two more players, claiming nine wickets for Delhi. The next two players were Hrithik Shokeen (68 not out) and Shivank Vashisth (38).

Throughout his Ranji career, Unadkat has been consistent with his bowling styles and his efficiency in bringing down opponents in a matter of few overs. However, this first over-takedown is going down in history.

Whether or not Unadkat manages to create such similar history in the upcoming matches is something we’d have to wait and watch for. Until then, we’d have to rejoice in this big win that he brought for the team.