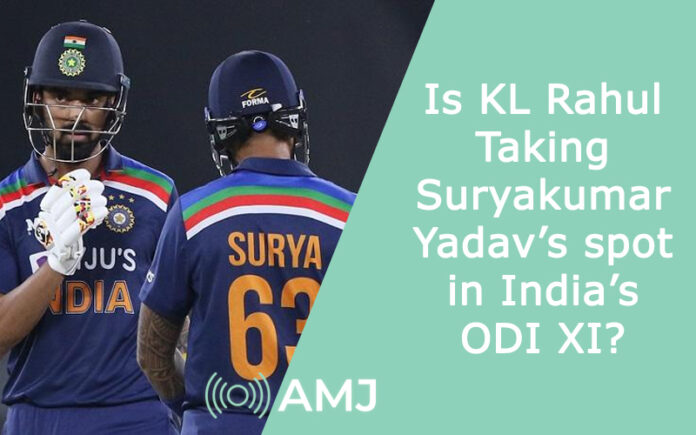 While India’s batting form seems to be quite a on track, the audience and cricket enthusiasts are heavily worried about the player line-up in India’s ODI XI.

How will leading players like Suryakumar Yadav and Ishan Kishan make their spot in the team, these are questions that are swirling around in the minds of the audience right now.

However, what’s quite frantic and unsettling at the moment is the fact that to somehow fit Surya into the line-up of players, the team will have to cut out someone else from the line-up.

With Shreyas Iyer being in his best form currently in the game, scoring consistently, it doesn’t look like a possibility for the team to swap him out for someone else. On the same end, KL Rahul, with an average ODI performance of 43.87 stands at Number 5 and doesn’t look like a replacement at this point.

But, given the fact that KL Rahul is a wicketkeeper, there are possibilities that Ishan Kishan will gain entry to the line-up of players, especially following Rishabh Pant’s fatal accident and his needing immediate rehab for his recovery.

With all this happening, there is a looming burden on Shubman Gill, who has to optimize and somehow up his game if he wants to stay in the team and at a higher level. If not, Kishan has the potential to replace him and move high up in the opener’s spot. This will leave Surya at Number 6.

Over the last year, KL Rahul has played 10 ODIs and has managed to score around 251 runs, with two fifties – one against South Africa and the other one against Bangladesh.

With the numbers depleting, KL Rahul is currently under a lot of pressure to perform well, especially with the World Cup season approaching. If 50-over cricket ODIs end up happening instead of the T20 format, there is a very high potential that Surya will replace KL Rahul at Number 5.

Given that Surya is named the 360-degree batsman in India right now, it isn’t surprising that most of the team and the audience is going to be rooting for him to showcase his talent in the upcoming games.

At this point, Shubman Gill and KL Rahul are under maximum pressure, especially if they fail to improve their form in the upcoming few matches. What kind of line-up comes around in this year’s ODI XI for India is something we’d have to wait and see.