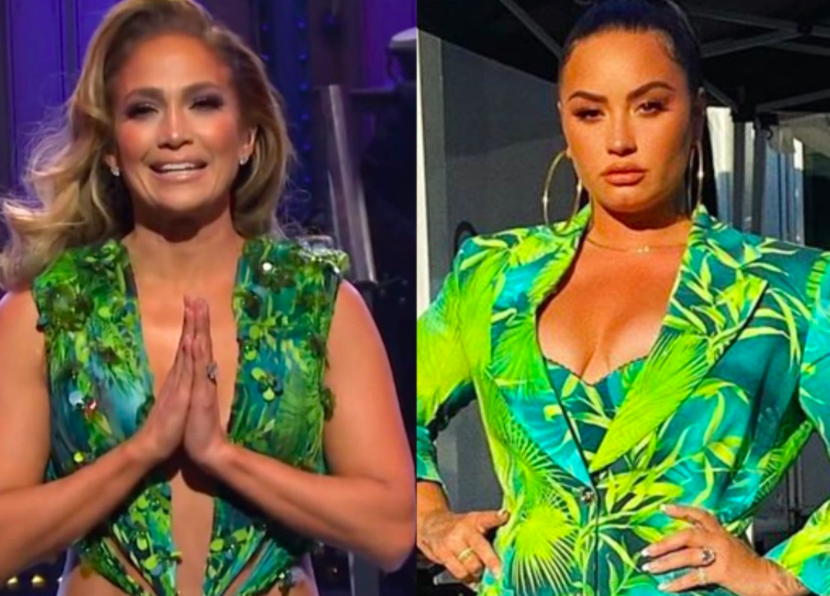 There is no doubt that Demi Lovato is a beautiful woman. But she looks extra stunning in her jungle print suit by Versace which was popularised by none other than Jennifer Lopez. After JLo wore the dress to the 42nd Grammy Awards in 2000, she made it a fashion statement. Even after two decades, her jungle print fashion is still going on strong and we can see Demi Lovato doing full justice to it.

Donatella Versace designed the jungle print dress which was worn by JLo again 20 years later to NBC’s SNL event. It is needless to say that JLo looked stunning in it as she always does. Versace also celebrated twenty years of the jungle print design with more new designs and campaigns.

For those who do not know JLo paired up with Kendall Jenner for a photoshoot and she asked for the jungle print dress to be a part of the shoot. You can see it in the video where JLo talks about the iconic jungle dress print that she wore back in the 2000 Grammy Awards.

Since it was JLo who popularised the said design, she was also invited for the re-launch event of the dress. Taking the opportunity of the situation, Donatella Versace took a lot of photos of JLo and Kendall Jenner wearing the jungle print design. She shared all the pictures on her official Instagram account. She also shared a photo of her with JLo wearing the jungle print design.

Demi Lovato wore the jungle print pantsuit by Versace. She paired it with a palm print bra top and single-breasted blazer. We can’t help but say that the colours looked great on her. She posted two pictures in the outfit to show her fans two of her looks. In one of the pictures, she is starring at the camera straight. In this photo, we can get the front view of the outfit. In the second picture, she is giving a side look.

As far as Demi’s footwear is concerned, she wore Nudist sandals of neon colour which are designed by Stuart Weitzman. Just so you know the shoes are available for $450. Demi shared her pictures with her followers on her official Instagram handle. In case, you haven’t seen the pictures yet, then you can visit her profile to see it.

According to us, Demi looked great in the iconic jungle print design. Her entire look was fab and she carried it off well. She received a lot of positive comments and hearts on her shared post-Instagram.