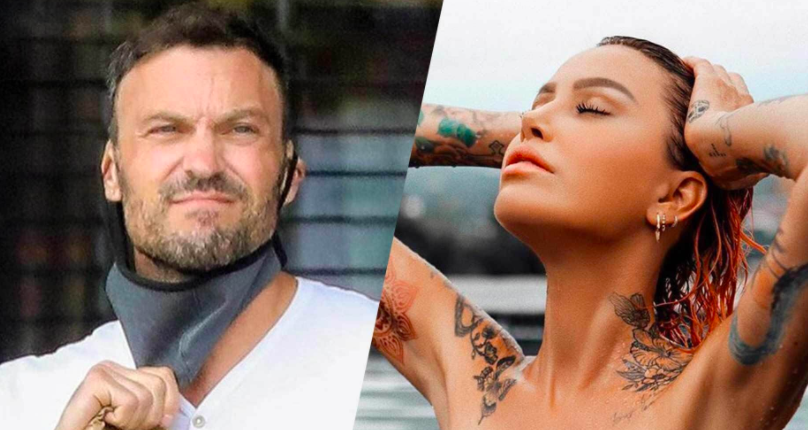 After separating ways with Megan Fox, Brian Austin is seen spending a lot of quality time with Tina Louise who happens to be his fling. However, we are not sure what kind of relationship they share as they have not openly talked about it ever.

According to an insider, Brian feels happy to spend time with Tina. For those who don’t know Tina Louise is a professional model. After divorcing Megan Fox, Brian is found to get interested in the model.

As far as, we know Brian is madly in love with the model. Tina Louise, the blonde beauty seems to attract Brian Austin Green with her charms. For now, they are often seen together with each other. But the pair haven’t acknowledged any rumours or news that’s going around them. Therefore, it is hard to tell what kinds of relationships the two of them share.

Back in July, there were reports that they have ended their fling. However, that doesn’t seem to be true as they are still together.

According to a source who spoke to HollywoodLife said that Brian still goes around with Tina a lot. they both hang out together and love to spend time with each other. also, Brian doesn’t seem to get enough of her.

The same source said that Brian is head over heels for the model. Her company makes him happy and feel positive when he is around her.

The source also said that Brian thinks Tina to be an easy-going person and that he always appreciates her for everything. She is a happy girl who always spreads positivity around him with her smile and also uplifts his mood. He finds her to be a positive energy in his life.

The same source also said that Brian is taking things slowly with her. he doesn’t want to rush anything right now. the news about them ending their fling was not true as they are very much together. She is like a breath of fresh air in his life.

According to the source, they have been dating casually for quite some time now. They started dating during the summertime. The source also lets us know that Brian tries to spend his time with Tina whenever he can.

This shows that Brian Austin Green has moved on from his past relationship. He is slowly approaching his new love interest and is not rushing anything with his fling. We are expecting Brian to accept his relation with the public. Whether he accepts his relation or not, we already know that there is something brewing between the two.

We can all see that the pair have been spending too much time together. Unless there is smoothing there, they wouldn’t do that. Brian is also giving a lot of time to his sons after his separation with Megan Fox.

Another source said that Brian loves models and maybe that’s why he is into Tina Louise. The source also said that they are great friends and the rest of the closeness happens naturally.