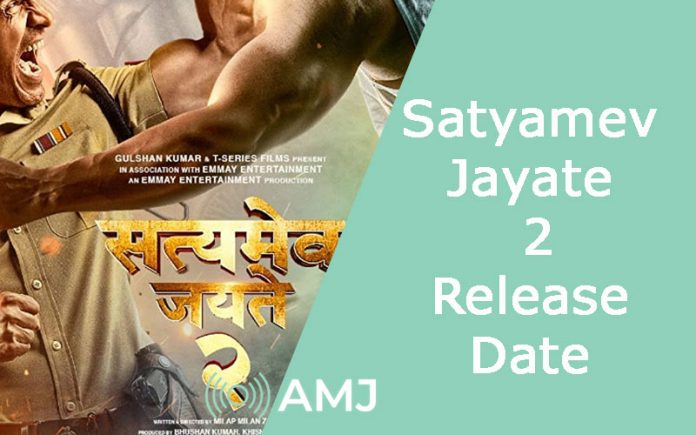 If you watch the first part of Satyamev Jayate wherein John Abraham managed to steal the hearts of his viewers with his voracious acting and an amazing plotline, chances are that you have been awaiting the release of Satyamev Jayate 2 as well.

The second installment of the movie, which was expected to be released this Eid, is not going to be anymore. The directors and filmmakers of the movie have had to postpone the release date of the movie indefinitely due to the surging Covid-19 crisis that has taken over India.

With the second wave hitting the country unprecedently, it is not surprising that people across the country are now prioritizing their health over everything else, which is why states have imposed lockdowns, resulting in the movie theatres being shut down.

Keeping all these issues into account, filmmakers of Satyamev Jayate 2 have decided to take a step back and delay the release date of the movie instead of releasing it on Eid this year.

Starring Divya Khosla and John Abraham, Satyamev Jayate 2 is also going to follow the same footprints as the first movie, which focused on the issues of countrymen and the Indian judiciary.

Nikkhil Advani’s Emmay Entertainment was the one who took to Instagram to break the news to their audience about the possible postponement of the movie due to the crisis that the country is in. They clarified that the movie is now going to be released at a later date. The post further emphasises and requested the Indians to stay safe and keep wearing masks till the crisis subsides.

According to previous reports, the movie was going to be released on May 13, 2021, along with Salman Khan’s upcoming movie, Radhe: Your Most Wanted Bhai. However, it looks like that the two movies won’t clash dates anymore.

Reports suggest that the Salman Khan Starrer movie will experience a hybrid release across the movie theatres across the world, about the imposed Covid-19 guidelines that have been shared by the governments. The movie is also going to be released on Zee5 for the viewers who want to enjoy watching the movie from the comfort of their homes.

While John Abraham’s Satyamev Jayate 2 has now been postponed indefinitely, the actor did have a successful movie release on February 2021 once the lockdown restrictions were lifted. The Satyamev Jayate 2 is a sequel to the super hit 2018 movie and has been co-produced by Bhushan Kumar and Krishnan Kumar’s T-Series along with a few other eminent producers in Bollywood fraternity.