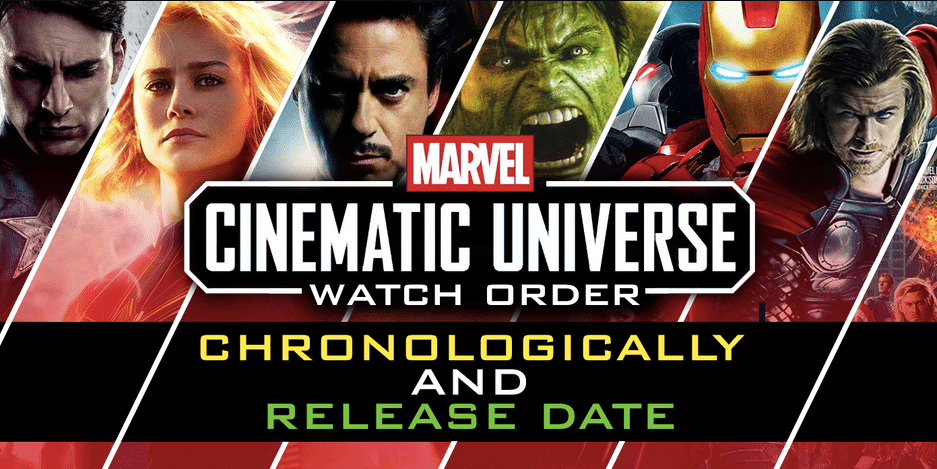 Are you interested in watching movies from Marvel Series? Well, to have best possible experience of the entire interlinked storyline, we’ve curated all movies for you. And, we’ve listed this movies in two orders; one is chronological storyline-based order & another one is based on release dates.

If you don’t know, there are 23 movies in total, which are released from marvel till date. Moreover, each of these movies are internally linked with each other. So yeah, one might easily get confused about where all these movies fit together and in which order one should watch it!

Moreover, since 2012 they’ve brought Marvel’s Avengers series which is a combination of all its individual super heroes. And, to get best experience of this series, you’re expected to watch all its individual hero’s storyline and about their existence. Yeah, you need to know about Iron man, Captain America, Thor, Hulk and many more.

Definitely, this way of storytelling was a tradition of comic books but with time media houses evolved and found a new way of expressing stories in most promising way. It adds up a lot to the experience of storyline.

So now, if you’re confused about in what order you should watch all these movies then we’ve got you covered in this article. And yeah, we’ve tried our best to provide you a most promising experience of watching these movies so please appreciate our efforts in comment section if you think it’s worth it.

Firstly, we’ll present you the list in chronological order of each event’s happening in Marvel Universe.

So, let’s get started.

In the MCU timeline, the first movie taken place in its chronological order is Captain America: The First Avenger. In the year of 1940, the Steve Roger’s origin story begins with Steve (Evans) & Bucky Barnes (Sebastian Stan). Climax of this movie is awesome where Steve’s plane crashes in 1945 and him being frozen for the next half century.

Next up in the chronological order is Captain Marvel. Yeah, this one is most recent movie in MCU release timeline. However, its storyline takes place before all other movies timeline so watching after previous one would add a bit of more connection and better experience. Basically, Story narrates a plane crash in 1989 where Brie Larson subsequently trained as a CREE and then she returns to the earth in 1995. Yeah, 1995 is the year when Captain Marvel takes place.

In order of Release date, this movie release at first. However, in story line’s chronological order, it takes place at third. And, you might not even believe that its timeline takes place in 2010 and not in 2008 when it was released. Yeah, it narrates story of two years after its releasing.

All the events in this movie takes place after very short time of Iron Man’s origin and existence.

It was further storyline-cum-sequel of iron man which takes place in 2011.

Key events of origin & beginning of thor might take you to the flashback of past. However, main storyline of this movie is based on the year 2011. So yeah, in chronological order it takes place after Iron Man 2 which was for 2011.

The team up of all the super heroes finally takes place in the year 2012.

This movie is highly underrated but all the occurances of events are shown for the year 2012 which deals with Tony’s PTSD.

The major fallback in the organization S.H.I.E.L.D is set after couple of years when it helped form the group of Avengers in 2014.

11. Guardians Of The Galaxy

All the events narrated in this movie also takes place in 2014 when Winter Soldier’s events takes place. You could watch it before winter soldier too if you like.

All events occurred in this movie takes place within very few months of its previous story. It was basically to shorten the movie length otherwise both movies are heavily coupled.

All Avengers teams up back again in the year of 2015 when S.H.I.E.L.D’s dismantling occurs.

In 2015, Scott Lang was working on being an Ant Man. Yeah, while all avengers were busy in handling ol’ultron this super hero was preparing himself for a major event of future.

THE second CA sequel’s all major events takes place in 2016. And hence this one should be followed by all others.

The first MCU spider man comes into the storyline after all other movies. It might be a heart breaking but yeah, till now spider man was not part of avengers but after this movie, its importance in whole storyline boosted a lot.

In wakanda, Black Panther takes place in the year of 2016. Yeah, the storyline might seem a bit ancient to some of you, but it’s not and actual storyline is pretty much modern. It’s just the tradition and culture shown in the movie which is ancient.

This super hero bridges the gap between 2016 & 2017. Yeah, doctor’s transformation to a super hero is not easy and it takes time.

In this movie, Thor visits Doctor Strange on the earth. So, we could say that it’s event might be occurring in the year of 2017.

Movie was released after Avengers: Infinity War. However, the major events of Ant Man and The Wasp are taking place in 2018 right after Thanos arrives on the earth and this film ends with an incredible Thanos snap which no one would ever forget.

The storyline of this movie takes place in 2023 and it comprises of multiple flashbacks in all the years connected with all previous movies.

The most recent MCU and its storyline takes place just after the end of Thanos in 2023.

Now, if you want to watch movies in order to release dates then here you go.

So, that’s all guys. We’ve covered these movies in both chronological as well as releasing order. Now, you could watch in whatever order you like. Happy Marvel Experience to you.