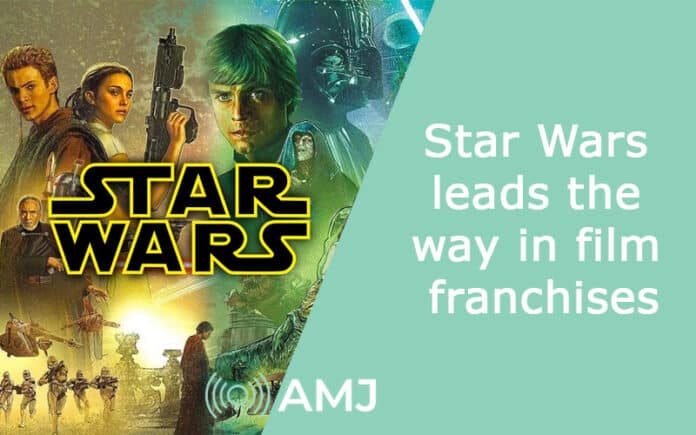 Creating a successful movie franchises is no easy task, with many sequels struggling to live up to the impact made by the first version of the film.

For example, Highlander II: The Quickening threatened to destroy the legacy created by the original when it was released in 1991.

It was a similar story with Police Academy, with the quality of the subsequent films suggesting the producers were the type of people who were happy to flog a dead horse.

However, many movie franchises have stood the test of time, even when some of the films in the series have not received critical acclaim.

According to recent research by Betway Insider this point undoubtedly applies to Star Wars – a franchise that is still going strong after almost half a century.

The Star Wars franchise has raked in box office takings of $10.3 billion, won 348 awards and has more than four million searches for its movie titles.

In terms of earnings at the Box Office, Star Wars is second only to the Marvel franchise which had the benefit of starting when cinema prices were much higher.

Star Wars also fares well in the rating stakes, with only Lord of The Rings, Harry Potter, Marvel and Spider-Man scoring higher on IMDb.

Episode V – The Empire Strikes Back scores the highest rating in the series at 8.7, just ahead of the original with is rated at 8.6.

Film accolades have not been in short supply for Star Wars, with the franchise netting an impressive 348 awards from the major ceremonies.

A feature of many successful franchises is retaining the services of actors who starred in the original, and Star Wars fits the bill in that respect.

The series has had 121 cast members return to it over the years, including Harrison Ford (Han Solo), Mark Hamill (Luke Skywalker) and James Earl Jones (Darth Vader).

The enduring popularity of Star Wars is also demonstrated by the amount of interest it generates amongst fans via online searches.

Spider-Man, Harry Potter and Jurassic Park also score well in this category, while James Bond gets a notable mention.

Given the longevity of the Star Wars franchise, it is no surprise to find that several new sequels are in the pipeline.

Filmmaker Taika Waititi is reportedly working on a Star Wars movie which has been tipped to be the next film in the series to be released in 2025.

Several other films are also believed to be in the works, although it is unclear when any of them will see the light of day.

Regardless of how many more films are released, the Star Wars franchise has unquestionably stood the test of time.