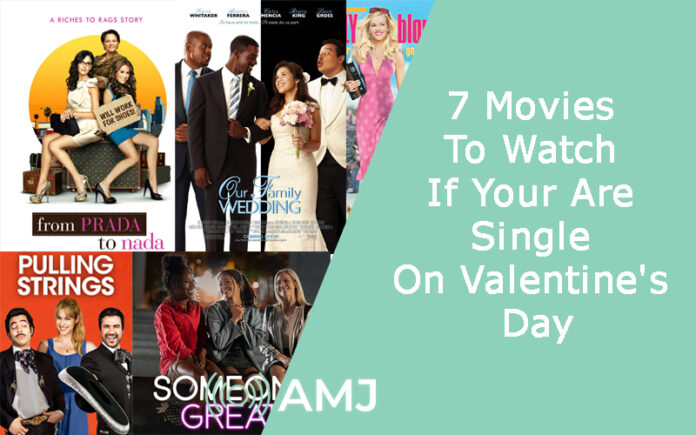 Valentine’s Day is approaching, and what better way to commemorate the occasion than by viewing some of our favorite romantic comedies?

Sure, some romantic comedies are silly, but that’s part of the allure of these assured happy endings.

Whether you’re single or in a relationship, all hopeless romantics will find something on this list that speaks to their hearts.

True, not all romantic comedies are created equal, and Latino moviegoers rightfully regard J.Lo as the queen of romantic comedies. There are, however, a slew of other films featuring Latino actors in comedic displays of affection.

All singles out there may find such preparation to be childish, unpleasant, or painfully nostalgic.

While being in love is a beautiful experience, it’s also necessary to be independent and aware of the proper kind of love.

You can download the movies to watch on Valentine’s Day from The Pirate Bay.

When cultures and nations clash, Our Family Wedding is a classic story.

Lucia, played by America Ferrera, falls in love with Marcus, played by Lance Gross, and the two prepare a dinner to announce their engagement to their respective families.

Before the big day, the families struggle to comprehend each other when they meet.

The misunderstandings and conflicts between the two families are primarily due to race, but love triumphs in the end, as it should.

2: From Prada To Nada

Alexa PenaVega’s Mary Dominguez is a typical privileged girl who doesn’t seem to care about anything.

When her father passes away, and the will is read, she discovers that they are destitute, leaving her with little choice but to move in with her maternal aunt in East Los Angeles.

She is left to figure out life without the enormous conveniences and pleasures she enjoyed while she was wealthy.

Mary learns about her family and culture along the way, and she falls in love with Bruno, played by Wilmer Valderrama.

Alejandro is played by Jaime Camil, a mariachi artist in Mexico City who attempts to obtain a visa to travel to the United States.

After being turned down by Rachel, Alejandro devises a strategy to prove that he is deserving of a visa.

Rachel arrives at a party where Alejandro and his band provide musical entertainment, and she wakes up with a very crucial laptop missing after too many tequila shots.

Alejandro believes he can persuade her to grant him a visa if he assists her in locating her computer, but their time together has yielded a pretty different result.

Jenny is going through a difficult breakup, and her best friends Erin and Blair are there to support her.

After learning that Jenny has taken a job in San Francisco, the three prepare to spend one more night out on the town in New York City.

In a love letter to self-love and irrepressible friendship, the three women embark on a wild, daylong trip throughout the city.

With a few beverages and some comfy clothes, this is the perfect movie to enjoy with your best pals.

Reese Witherspoon’s part in Legally Blonde is one of her most well-known.

Elle Woods, an upbeat woman, finds her world flipped upside down when her long-term boyfriend breaks up with her instead of proposing to her in the film. Elle is devastated, so she follows him to Harvard Law School to win him back.

While that may not appear to be a feminist story, it is because Elle proves everyone who questioned her wrong by following him to Harvard.

The film serves as a potent reminder to singles, particularly women, that they may achieve their goals regardless of their relationship status or hair color.

Singles who have recently gone through a nasty divorce should avoid this frighteningly realistic portrayal of a collapsing marriage.

However, for those who have broken up with someone they had hoped to marry, this film will serve as a gentle reminder that it may have been for the best.

Compromises are essential in any relationship, and if there were differences that led to a split, being married may have made it intractable.

It follows Charlie and Nicole Barber on their journey through love, marriage, and the brutally painful experience of a horrible divorce.

The film 500 Days of Summer, starring Joseph Gordon-Levitt and Zooey Deschanel, intelligently discusses a painful breakup with the perfect companion and the genuine truths of relationships and life.

Marc Webb’s directorial debut shows how true love is frequently an illusion that people construct based on their wants and how life never stops for anyone.

Sadly, some things are brief, but they are thankfully sweet while they endure.

500 Days of Summer stands out among the plethora of adorable teen rom-coms aimed towards younger audiences.

Couples must have already devised complex plans to woo their lovers with only a few days until Valentine’s Day.

To know more about these, ping us in the comment box.