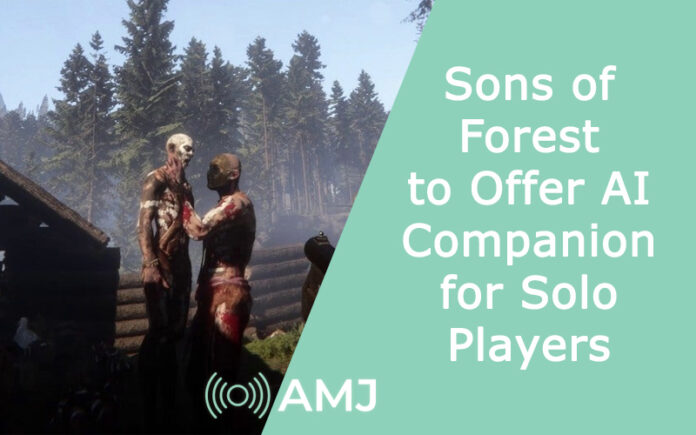 If you tend to play most of the video games by yourself, feeling left out is pretty common. Don’t worry though because the leading inbound survival game, Sons of Forest, will offer their players an option to have an AI companion for the solo players.

Following the kind of popularity that the predecessor, The Forest, acquired in 2018, it isn’t surprising that the upcoming Sons of Forest will provide players company who want to go through the entirety of the game by themselves.

During the 2018 release, The Forest gained a lot of traction and popularity for the unique survival strategies and horror elements that it included in each step of the game. In the game, the players had to fight their way through a tribe of cannibals and mutants – all of which were set in a dense forest and hence the name of the game.

Featuring unique crafting and survival mechanics, it wasn’t even a surprise that the game managed to carve itself a good place in the horror genre. With the new installment of the game on the way, the players have now gotten insight into a few new features.

Upon closer inspection of the preview video from IGN, the players found that Sons of Forest features a lot of similarities with its predecessor, be it in terms of the game’s location, the building mechanics, or the gameplay in general.

However, what caught the attention of the players was the additional option to choose an AI companion for the solo players who are going into the game by themselves. Players believe that this additional help will come in handy for the players who are feeling lonely and want some company during the game. They can gather resources and support the players through their rendezvous.

Although Sons of Forest was initially set to come out in 2021, the game has faced a lot of delays and the release date has been pushed back a couple of times now. However, with all the confirmations sorted, it is believed that the new installment of the much-coveted horror survival game is coming out in February 2023.

Endnight Games hasn’t revealed an official date for the release yet. However, we can pretty much guess that the Sons of Forest will more than likely come out by the first or second week of February 2023, provided that things aren’t pushed back any further.