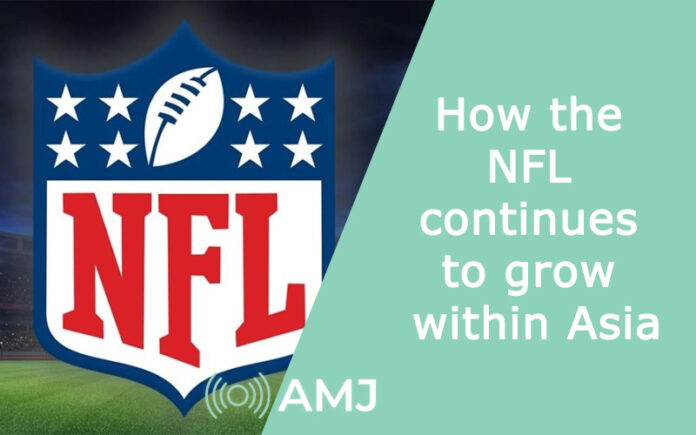 China is one of if not the biggest growth market in the world and global corporations are clamoring to acquire a slice of the action. Nowhere is this phenomenon more marked than sports franchises looking to expand, and the league that outperforms all others in terms of revenue is the NFL.

The NFL in Asia

The sport has amassed a sizable international following despite being referred to as “American football” in many nations outside the US – the designation of “football” being largely reserved for soccer. The New England Patriots are one of the most successful franchises in the league with six Super Bowl wins out of eleven appearances.

Weibo, China’s largest social media platform, shows that the Patriots have the most followers of any North American team, reaching the milestone of 500,000 followers, increasing two fold in less than 12 months. This performance suggests that the Patriots are gaining popularity quicker than soccer teams such as Manchester United.

The success can be attributed to a deliberate effort to amass support in the region with two dedicated TV shows, The Tom Brady China Show and Gillette Stadium TV – and the strategy appears to be paying off. Despite this, basketball remains the largest spectator sport in China and the NBA the most popular league – check out these Chinese nicknames for popular basketball players.

The sport of football as a whole is growing in the Asian continent. Many countries have set up their own leagues and the Asia-Pacific Football League was created to pit some of the best teams from each country against one another.

Japan was the first Asian team to create a professional football association, JAFA. JAFA administrates leagues at three levels, high school, college and corporate. The top tier of Japanese football is the X-League which culminates, like the NFL, in a champion of champions game, the Japan Championship X Bowl followed by the Rice Bowl in early January.

The Super Bowl marks the pinnacle of the NFL calendar where winners of the respective conferences, the AFC and the NFC, go head to head in an attempt to get their hands on the prestigious silverware. Betting on the event has become an international pastime – check the Super Bowl odds 2023 now to see how bookmakers have your team faring in this year’s contest.

This year’s Super Bowl will take place on February 12 at State Farm Stadium in Glendale, Arizona – the home of the Cardinals. TV viewership of the event over the last decade has often exceeded 100 million tuning in live, augmented by the world-renowned halftime show. Rihanna announced she would be headlining the show and ticket prices shot up as a result.

Tencent, China’s largest streaming platform, is the most popular method several million Chinese citizens choose to use to watch the Super Bowl live. Tencent has a three year exclusive agreement with the NFL to broadcast games in the region.

Many other Asian countries bid for broadcasting contracts with the NFL to show the super bowl – NTV in Japan, Truevision in Thailand, Saran Sport in Turkey and Star in India.

Other Sports and the Asian Market

The NFL isn’t the only global sports league that has a stake in the Chinese market. The English soccer Premier League has seen a move toward East Asian sponsors on the majority of their kits with only four teams sporting domestic companies on their uniforms in the latest season.

Interestingly, this shift is due, in part, to gambling’s illegality throughout much of China. Sponsoring sports teams that garner international attention and TV coverage is a method companies use to promote their services where advertising on home soil might be a problem.

A UK government gambling white paper is set to review the use of betting sponsors of sporting clubs in a measure with similarities to the EU banning tobacco advertising in 2005. Prior to that, many iconic Formula One motor racing liveries were a result of tobacco company sponsorships.

Baseball is hugely popular in East Asia with Japan, South Korea and Taiwan all hosting highly contested competitive leagues. Many players from these countries have also made the switch from their domestic leagues to the MLB which makes selling the MLB that much easier.

To date there have been several NFL players of mixed Asian ancestry but only three fully Asian players in the league’s history and only Korean born Younghoe Koo, placekicker of the Falcons, that plays today. Factors such as these also affect participation numbers, and higher participation figures equates to higher TV ratings. The NFL, therefore, has the odds against them for truly taking over the Asian market but so far they seem to be making successful strides in spite of those hurdles.